Hello, I am new to this forum so thank you for letting me take part.
I have been investigating an ancient Holy Well, the Lady Well, very close to where I live in Lewisham, South East London. I have discovered that Ladywell also had a Spa / mineral spring where people came to take the waters for rheumatism, sore backs and weak eyes. There is also a church built on Saxon foundations probably built on an earlier pagan site. The village also has a ford and a number of ancient trackways.
I am keen to find out how this area may fit into the wider south east London area in terms of earth mysteries and ley lines.
I would be very interested in any information that may help.
Top

Hi Robert, welcome to the forum. I've moved your post into the Earth Energies section where it will feel more at home.

In answer to your question, the best person to contact about this would be Chris Street, author of 'Earthstars & the Visionary Landscape' and 'London's Ley Lines - Pathways of Elightenment'.

Chris has done a vast amount of research on the leys in the London area and I'm sure he'd be able to help with your quest.

You may also find this collection of Watkins leys in Google Earth to be of use:
Grahame
The trouble with having an open mind, of course, is that people will insist on coming along and trying to put things in it - Terry Pratchett.

Hello Robert, we are neighbours! 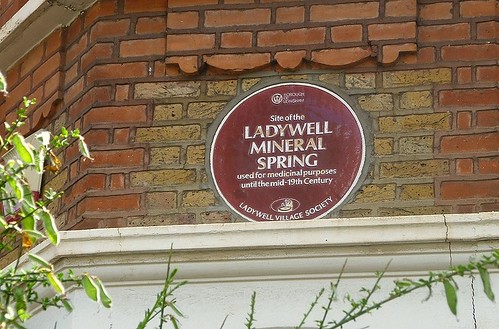 This plaque (my photo) shows the original source of the ancient Lady Well, now under No 149 Ladywell Road.

Lewisham was founded in the 6th century by a pagan Jute, Oleofsa, who, after burning his boat, settled near St Mary's Church, Ladywell; so Lady Well almost certainly had pagan origins. In 862 Lewisham was referred to as Liofshema mearc, then as Lieuesham in 918 and, in the Doomsday Book of 1086, as Levesham.

In 1986, Robert Smith published The Well of Our Lady (The Ladywell Village Society, London, England, January 1986). In it, he shows how the sacred well was recorded as early in local records as 1472. Smith notes that there has been a Christian Church near the site for over a 1000 years, and that in the past, the well was dedicated to St.Mary, and was visited by pilgrims on there way to Canterbury. The dedication to St. Mary also fits in with the many other examples of Christianity taking over Pagan sites in this way. Sadly, the well is now covered by the road over the bridge by the entrance to Ladywell station. (That is not where this plaque is!)

Chris Street never says much about London south of the river, his stomping grounds are mainly on the north bank.

Anyway, if you ever want to do some dowsing round & about - give me a shout.

Thank you for these posts. I am Robert Smith who you refer to as authoring The Well of Our Lady. The book has just been re-printed and we have just unveiled a plaque to the Lady well:

I would very much like to take you up on your offer, Helen, to dowse the earth energies / leys in our area. So good to see we are neighbours and that there is somebody nearby who can help. I feel there is mush to discover.

I live in Chudleigh Road. How is it best to make contact?
Top

Hi Helen and Robert,
I dont want to confuse things looking for the Ladywell, but at 149 Ladywell Road I dont dowse any ancient water well or forces in that area.BUT if you Google Ladywell Lewisham London you come to a park just to the south of that house, and at two places are forces/water and ancient influence that I feel are the things you are seeking.Just below the Google marker is a road and T junction to the south of the marker, and where you see the white car parked on the left near the T junction is the first ancient water well signature,and if you follow the road at the T junction to Slagrove Pl on the left is another ancient site, with I feel both offering Leys perhaps but plenty of dowsing influence.Good hunting.

Return to “Leys and Alignments”