Helen-Healing wrote: 'The Tump'? I looked for it once, but couldn't locate it. I'll try again.

I made it to the Tump this morning, Mike!

Unfortunately when I got there, I discovered I'd left my dowsing stuff at home.

Typical - I'm nutty as a fruitbat.

I made the mistake of taking the dog, and the rabbit smells drove her batty, so progress was slow. But we did make it to the Top of the Tump

slipping & sliding all over the place as it was very muddy!

...I was wondering what caused them?

The views from the top are stunning..

(Actually, I was originally heading to Knightlow Hill to suss out the Wroth Stone, but it's right beside the A45 & I'd passed the pull-off before I realised.

Must be more alert next time. Have you been there, Mike?)
Top

Sorry no Helen, its yet another place to walk when I can, have a huge list to visit when the chance comes, should start with the nearest first, then perhaps I might reduce the list...
Top

Today I took myself & dog off to look for Brandon Castle, or the remains of it. It happens to be on private land, I discovered - it belongs to a riding school. However, I politely asked the gent there if I could cross the fields & see it, and he gave his consent.

There are just some small tumps & the motte left now, with traces of an original wall, and the top bit is being occasionally used by the riding school for training horses as far as I can see, as there is a well worn circle there. Anyhow I dowsed a bit, & discovered what seemed to be 6 energy points within this circle, which, when I followed it through, was in the form of a 6 pointed star! Very interesting, thus: 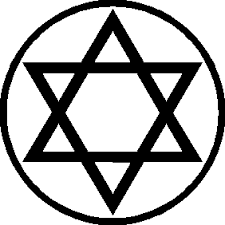 While I was out & about, I went to find what's left of Baginton Castle. When I got to the church, I found a group of 4 people who, very oddly enough, were there to see the castle as well!! Coincidence?? They were from the local Heritage Society, and had made an appt with the farmer whose land the castle is on (yes, it's on private property too) so that he would let them through. Now there was only a half hour window when I could have met these peeps, and I turned up just at the right moment, otherwise I wouldn't have been able to see the remains at all!!

So I pretended I was one of them,

dog and all, & we were taken across & down a meadow full of horses to view it, although not allowed to get very near. I didn't dare ask to dowse it. Apparently there was a complete Saxon village beside it years ago, but no visible above-ground signs of it now.
Top

Helen you do get about, and manage to find so many interesting things,that Brandon site sounds well worth a dowse about, I have to put it in the book of things to do,the list is getting larger all the while, but please keep looking,then I can go direct to the very best places you have found, your a jem...Funny how you JUST happen to visit the time and day when others have planned the same journey, I believe it to be fated, its the only explaination...Baginton Church has Leys/energy lines pass right where the Church doors are if you ever pass that way Helen,I visited some years ago, but found the energy lines to form in the precise postion of the doorway there.With the Church doors locked I imagined the font or altar to be just inside here, right where the energy lines passed, and the Church is very old, so somebody dowsed this site and had the Church built in the correct postion to gain the influence of this wonderful energy.
Top

Helen just had a look on Google Earth and found the site you mentioned, and would agree with you something very ancient and active is right on the top to the west where a circle is worn in the grass on the raised ground.Circles are in the fields to the west as well, but these dont contain any powerful energies here, just where the raised ground is you mentioned.Looks like the raised ground is where the Castle had to be from the looks of the site, yet nothing seems to be showing, just the earthworks there, well done for picking that up, its just become A MUST PLACE TO VISIT,goes to the top of the list, thanks for that Helen.
Top

As I was walking back to my car, I passed the church, which is just before the gate that we went through to get to the 'castle', and then stopped dead & went back & walked twice round the church! Yes it is very old and yes, it was locked. I've no idea why I didn't think to dowse there.

However I did notice a flyer there that said there is to be a performance of chamber music in the church some time soon....tsk .. can't remember what or exactly when now, but I'll go back soon (snow permitting!) as I want to take a picture of the Baginton Oak which has no leaves just now & looks fantastic! The musical evening sounds like just the way to have a sniff round the church!

I haven't been able to go back to Baginton yet, but hope to soon as I need to visit a business near there & can kill two birds with one stone.

Regarding the tump at Brinklow....I was looking at my photos from the top again & it seems to me that this fairly straight road* goes runs from the Tump to Stretton-under-Fosse. This a 'C' road that runs east/west.


I shall investigate next time I go there. Haven't had too much time to go globe trotting recently!

*Later.... I've discovered this road is the Fosse Way, which is more or less straight until it reaches the Tump, when it makes a detour round the hill!

Also found this interesting 1910 photo of the Tump, showing some graves in the foreground. The church must be just to the fore of these.
Top

I got back to Baginton church today (Church of St John the Baptist), & did a bit of trotting around.

I imagined the ley line would run the length of the church but it didn't - it ran across it. Or perhaps not - the door which is used now to enter, is obviously not the original one... This is the door used now, on the west side of the building..


Here are pics of a very old door on the south side, now bricked up, possibly because the wall is 'leaning' outwards slightly..


..and a old window (or possibly an ancient door) on the north side, also bricked up, opposite the door..


I found the energy ran north>south through this window & door & down the path that leads to the road.

Look forward to seeing if you can confirm this, Mike.
Top

Hi Helen,
Yes off the top of my head the old door was on the south side Im sure, but it had a wooden door then, some years ago and time does blur the memory, well it does mine, have to go back and check.But Im sure like you said the energy ran across the Church end rather than down its length,I never took compass bearings then, and I know I should,as it saves any confusion later.Looks like you have the same breed of dog the x wife has, hers is female and very nice and wags her complete back end when you walk in, and the bark is so high pitched it hurts my ears, if I ever wanted another dog I would get one of those, its very loving and brave...Could you see if the Font is at that end or the High Altar perhaps,where the energy line passes, have a look when Im there next time, only live a short distance away from there at Exhall, down the A46 and Im there, thanks for the posting.
Top

mike wrote:Could you see if the Font is at that end or the High Altar perhaps,where the energy line passes?

I couldn't see anything inside the church, Mike, it was locked, so no idea what it's like inside.
Top

Quite by internet accident today, I came across this..

Hundreds being the local Anglo-Saxon administrations, which very often had mounds made to denote the meeting or moot place. So The Tump at Brink-low could have been one of these moot sites? Interesting that the Pagan community still use the word moot for their meetings - even though it is usually in a pub!
Top

Hundreds being the local Anglo-Saxon administrations, which very often had mounds made to denote the meeting or moot place. So The Tump at Brink-low could have been one of these moot sites? Interesting that the Pagan community still use the word moot for their meetings - even though it is usually in a pub!

THINK I have a little pagan in me then,nothing like a meeting in the pub,never get anything done, but when you leave you dont CARE.

Met some Pagans in a wonderful crop circle some years ago,the atmosphere was magic, a day to remember.
Top

Mike - you might like to join Cov Earth Spirit!
They have a new site..
http://coventryearthspirit.ning.com/ (link broken)
Top

THANKS HH , I will go over and have a look,nice to speak with you again, I journey between web sites to keep in touch,till they kick me out

Return to “Leys and Alignments”